This NBC mid-season comedy is right up my sitcom alley for a variety of reasons.

This comedy based on the book from TV personality/comedienne Chelsea Handler (Chelsea Lately) will take a hilarious look at carefree Chelsea, who lives life to the fullest and doesn’t hold anything back and apologizes for nothing. Contrary to what you might believe, even though this show is based on the life of Chelsea Handler, she isn’t the playing herself in the starring role, that position is being played by Laura Prepon (That 70’s Show). 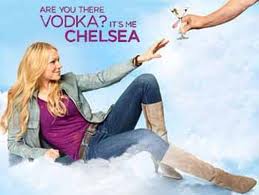 Rounding out the cast is Jake McDorman (Mark), a charming bartender that works, and acts as a potential love interest for Chelsea, Mark Povinelli (Todd), the person who keeps Chelsea and her humor in check, Lauren Lapkus (Dee Dee), Chelsea’s shy and sheltered roommate, and Chelsea Handler, who has a recurring role as Sloane, Chelsea’s married sister who has the total opposite personality than Chelsea.

Even though i’m not the biggest Chelsea Handler and her comedic routines, this seems like a comedy that

is the perfect comedy could help turn NBC’s comedy development around. Next season, NBC will turn away from developing workplace-type comedies like The Office and 30 Rock, and start developing comedies that are produced in the more traditional, single-camera format being headlined by big names like Sarah Silverman, Dane Cook, and Sean Hayes. Chelsea, if successful, would also be the perfect companion for NBC’s current female skewing sitcom, Whitney.

The clip offered above does offer a few laughs, but NBC did re-tool the show, including re-casting the characters played by Jo Koy, Angel Laketa Moore, and Natalie Morales, so it will look and feel a little bit different when the show hits the schedule next year.

Will Are You There Vodka? It’s Me Chelsea be the next “it” comedy? I have no clue, I cant predict the future. However, I am interested to see if this show, which has the set-up, punchline, studio audience laughs-type formula of NBC sitcoms of the past (which I love), to be the spark in the NBC comedy line-up, and coupled with the star power of Chelsea Handler and Laura Prepon, could drive enough eyeballs to the ratings-challenged NBC line-up.

This comedy won’t be the next Parks and Recreation or The Big Bang Theory in terms of quality or blockbuster ratings, but to get renewed by NBC, Chelsea only needs to lure 6+ million viewers viewers, and a A18-49 demo rating of 2.5-2.8 to be renewed for a second season. I doubt that’ll be too hard for a show with Chelsea Handler’s name on it.

Are You There Vodka? It’s Me Chelsea premieres early next year on NBC