The cast and crew are back on the streets of Los Angeles for the new season of TNT’s critically acclaimed police drama Southland. 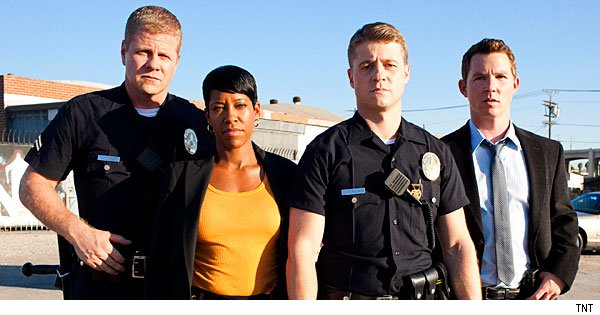 Southland stars Micheal Cudlitz (Office John Cooper), Regina King (Detective Lydia Adams), Shawn Hatosy (Officer Sammy Bryant) and Ben Mackenzie (Officer Ben Sherman) in this intense, heart pounding, and emotional police drama that follows the personal and professional lives of these four L.A.P.D officers as they try to balance their home and work lives, and all the problems that come along with being a L.A.P.D officer. Lucy Liu will be guest starring this season as Officer Jessica Tang, who will be teaming up with Officer Cooper (Cudlitz) and will be bringing her own personal problems to the squad car that her and Cooper will share.

tries to prove himself to the force after coming back from recent surgery. Det. Adams (King) will also be getting a new partner and potential new love interest this season (Dorian Missick) after her partner from last year (Tom Everett Scott) was fired from the department. Officer Sherman (Mackenzie) will be adjusting to life on the force after just passing his rookie training. In the major season 3 ending plot, Sammy Bryant (Hatosy) will be returning to the force as a uniform officer after he resigned from being a detective when his partner, and best friend Nate Moretta (Kevin Alejandro) was shot and killed in the line of duty in the season 3 finale.

Southland originated on NBC during the 2008/2009 season with a 7 episode run. After being cancelled by NBC, TNT immediately started airing season 1 repeats and picked it up for a second season. Season 4 is slated to premiere Tuesday, January 17th at 10p.m. for a 10-episode run.

If you havent seen Southland yet, hurry and catch before the new season. You will quickly realize that Southland is one of the best shows on television.