Is fear a factor for you?

That is the legendary tagline said at the end of every episode of Fear Factor by host Joe Rogan. The stunt-filled reality show pushes contestants to the limits with a wide range of dangerous tasks, which include everything from hanging from helicopters, driving cars into huge pools of water, and eating grotesque things like cow brains and live bugs. NBC premiered the 7th season of the revived reality show last night and stayed true to the promise of bringing more fear to the contestants who are brave enough to sign up for the $50,000 prize.

Fear Factor originally premiered on NBC in 2001 as an answer to CBS’ wildly popular Survivor franchise. Fear Factor quickly became a success for the network and stayed a success until the network decided to pull the plug on the show in 2005. In October, NBC president of alternative and late night programming Paul Teledgy announced that Fear Factor would return and would be more dangerous, more exciting, and more spectacular this time around thanks to the updates in modern-day stunt technology.

Last nights 2-hour premiere was just as intense as it was 10 years ago. The stunts were dangerous, the things they had to eat were more deadly, and the total fear factor of everything was up across the board.

In the first of two episodes last night, it was a family affair on Fear Factor. Four teams of two gathered in the mountains of California with host Joe 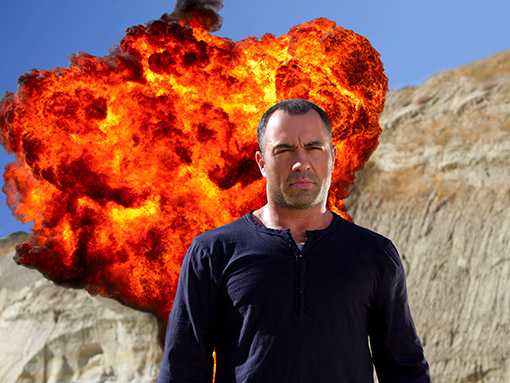 Rogan (returning as host for season 7) to do the first big stunt, a stunt that would test if the show was really going to be as fearful the second time around. It indeed was. Four teams (including a mother/son team that could raise a couple of eyebrows with their sexual chemistry with each other) had to start out hanging from a helicopter. Once the helicopter lowered them to the ground, they had to jump on the bed of a truck – while being tied to the rope from the helicopter, and open barrels to find the flag. Once the truck got to the end of the road, the teams were lifted hundreds of feet in the air, forced to watch the truck blow up in flames. It was like a scene from an action film.

Fear Factor wouldn’t be Fear Factor if they didn’t have to eat something gross or dangerous. Eating five live scorpions was the remaining teams task to see which could do it in the fastest times. The last two teams then went onto the final challenge – being strapped onto the grille of a cement truck while the truck drove through a obsticle course crashing into wood buildings, and getting water, foam, and debris thrown at them to make it harder to catch any flags.

Being off of the air for 5 years hasn’t changed Fear Factor one bit. Joe Rogan still antagonizes the contestants to pump them up, the teams still talk trash to each other, and fear is still the main character of this show.

Find out if fear is a factor for you! Fear Factor airs Mondays at 9p.m., until January 20th on NBC.