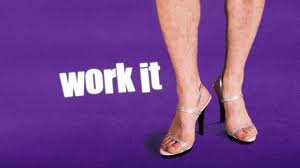 A tell-tale sign that a new sitcom is bad is when not one shed on laughter is had while watching. That happened tonight while I watched the series premiere of ABC’s Work It. I already didn’t have high expectations for Work It before its premiere due to the lackluster promos for the show, but I was going to watch and see what is was all about. There could have been the possibility of all the unfunny parts being shown in the promos and there should be some kind of show buried deep within, and turn out to be a sup-par show. All that hope was gone as soon as the second commercial break came around.

This show could have been somewhat better if the plot was different. Revolving around two guys, Lee (Ben Koldyke) and Angel (Amaury Nolasco) who have to dress up as women to find jobs as

pharmaceutical reps after their jobs as car dealers are eliminated. I know this is TV, but I can’t get past the past at how unrealistic this is. Both Lee and Angel get a job at this pharmaceutical company working with women, having to hide the fact that they’re men. A much more interesting, realistic, and workable plot could have been if these two men – who continue to dress as men – begin to working at a pharmaceutical company with all women. It would be an interesting fish-out-of-water situation that would offer much more laughs than two men trying to hide they fact that they’re men to the woman they work with.

I don’t think it’s the fact that these two have to dress is women’s clothing is so bad, I think it’s just bad that ABC thought this show was good enough to put on the schedule, and think it’s actually funny.

Work It is compatible to Last Man Standing in its tone, look, comedic styling (I use that term very loosely), and its mutli-camera setup than Man Up!, the show it’s replacing on the schedule, but that’s where the similarities end. Last Man Standing is far from the best comedy on television, but it has improved greatly since its fall premiere. I don’t see Work It improving with its bad jokes, awful acting, and atrocious plot.

As for its ratings. Obviously its too early to tell, but it could go two ways. Ratings could be terrible and cancelled as quickly as Man Up!, or ratings could be through the roof because people were curious to see if the show was as bad as it looked in the promos.