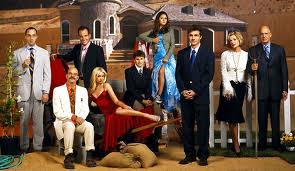 The Emmy winning sitcom Arrested Development is going through a cycle that very few shows do, being revived after a forced cancellation. For years, rumors were piling up around the comeback of the critically acclaimed but ratings challenged Fox comedy. Last year, Netflix picked up the rights to the series, but that’s all the news that was given on the possible resurrection of the infamous Bluth family.

Much more solid news has been released today. Arrested Development writer and co-executive producer Dean Lorey wrote on his blog that him, Mitch Hurwitz, and Jim Vallely are in the process of writing new scripts for a series launch of 2012.

The whole cast including Jason Bateman, Will Arnett, Portia de Rossi, Michael Cera, Jeffrey Tambor, and Jessica Walter are expected to return for the 9-10 episode limited run. While there are still no official deals with the cast members and 20th Century Fox, the studio producing the revival, all the cast members expressed their willingness to return to the series.

The 9-10 episodes of Arrested Development that are due out next year will be a bridge between the abrupt cancellation, and the rumored feature film.