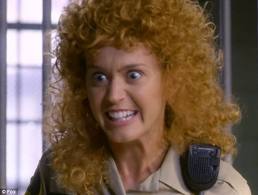 If you would have guessed Katy Perry, well, you deserved a great prize!

We all know Ms. Perry has comedic chops since she has hosted Saturday Night Live and had a guest appearance on How I Met Your Mother, but now the superstar will be getting a makeunder for her next role on Fox’s Raising Hope.

Perry will play a prison attendant named Rikki, an unattractive woman with a mustache and big 1980’s style hair. Essentially, the total opposite of anyone’s “Teenage Dream.”

Perry got the guest role on Raising Hope because she’s best friends with Hope co-star Shannon Woodard. How would’ve known?