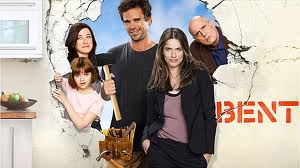 It was just yesterday when NBC announced the series premiere of Bent, now, here’s the first preview for it.

Bent is a romantic comedy centered around recently divorced Alex who hires Pete, a charismatic but irresponsible contractor to renovate her house after she and her daughter relocates after she divorces her husband, who is now in jail. Alex was a high-strung, no-nonsense lawyer, and Pete is a recovering gambling addict who is trying to get his life back on track. They both come into each others’ lives so they can try to make them better, and hopefully find some romance along the way.