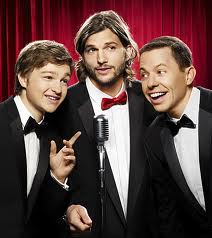 CBS has already renewed 18 series for the 2012-2013 season, but one of their biggest shows, Two and a Half Men, wasn’t apart of that renewal announcement. For weeks, Men creator/executive producer Chuck Lorre has been trying to negotiate a deal with the shows new star Ashton Kutcher to stay on the show for another season (Kutcher was only contracted for one season). Money is the obvious cause in this case, and a lot of money at that.

Kutcher is reportedly asking for $1 million per episode to return for the shows tenth season. Kutcher currently makes around $700,000 per episode, a far cry from the $1.25 million per episode that Charlie Sheen was making when he was fired from the show last year. Now Kuthcer feels like he should be making the big bucks if CBS and Warner Bros. Studio wants to keep their cash cow of a show going for another season.

The bad thing in this is that CBS has made an offer to Kutcher, and Men co-star Jon Cryer, but not the offer that these two stars were expecting – a 2 year deal with no raise.

That’s far from what was expected for the shows stars, and even from Lorre. According to The Hollywood Reporter,  Kutcher and Cryer weren’t too thrilled at signing onto the show for two more seasons with no raise at all, especially since it has been widely expected that the show would take its final bow at the end of next season, its 10th.

Now negotiations are expected to get very complex, and will turn very problematic very fast. CBS doesn’t want to pay the already extremely well paid actors any more money, but without the bigger paycheck, Kuthcer and Cryer are expected to walk, and CBS will be left without a vital piece of their Monday night schedule. Lorre has even commented at PaleyFest ’12 that he doesn’t plan on continuing the show if Kutcher doesn’t return. The bigger problem at had is the show is set to shoot its season (or series) finale next week. If both parties don’t come to an agreement by time the finale is shot, Two and a Half Men may not have a proper sendoff for its characters, and Chuck Lorre has said that’s the last thing he wants to happen.

Even though both stars deserve to get pay raises, the ratings for Two and a Half Men haven’t been to rosy this season. Men is currently averaging 11.9 million viewers and a 3.6 in the 18-49 demo, hitting a series low for its last original episode. While these numbers would be fantastic for any other show, it’s the start of a slippery slope for this sitcom, especially when the show was averaging 15-17 million viewers this time last year.

On the other hand, Two and a Half Men is one of the top shows currently in syndication, and makes millions of dollars in revenue for WBTV. So the future financial aspect may make this deal happen in the end.

The future of Two and a Half Men is dangerously up in the air right now (again), and just like all the other times the show has been in question of being renewed or cancelled, there is no way to know how this is going to end.